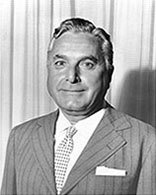 Salvador Arena arrived in Brazil in 1920 as a boy of 5. The family settled in São Paulo and his father Nicola set up a mechanical workshop where he started processing metal scrap. As a result, Salvador spent his childhood surrounded by spare parts and machinery.

Arena graduated at the age of 21 in civil engineering from the University of São Paulo (USP) Polytechnic School, and his first formal job was with Light, where he worked on the implementation of the Cubatão hydroelectric scheme, on a model planned by Billings. At that time all the machinery was imported. When a part broke, the only solution was to make a new one. For a long time, Salvador Arena was the one who designed the parts, prepared a detailed project and had them cast. The result was often better than the original.

In 1942, armed with his genius and with just 200 dollars in his pocket (his severance pay from Light), he founded Termomecanica. At the start the company made bread ovens and baking equipment. Later on it started manufacturing tempering furnaces, ventilators, rods, smelting furnaces, presses etc.

In the mid-1950s a new plant started to be built in the Rudge Ramos district of the city of São Bernardo do Campo, producing a variety of non-ferrous metals. This was an extremely promising time, with the country in transition from an agricultural to an industrial economy.

At the end of the World War II, Arena took advantage of the renewal of the US industrial park and bought second-hand machinery and equipment, such as furnaces, cutters, turners and his first extruder, multiplying his production capacity at minimum cost, since he modified and improved all the equipment.

An audacious entrepreneur, he created his own new management model, which was advanced for the 1960s and which prized, above all, his “valuable human capital”. He knew his employees’ first and last names, and their families, and provided benefits for them such as food baskets of up to 60 kg and medical and dental care.

He created a distinctive salary policy, which was the trademark of Termomecanica. It all started in 1948, when after a successful production effort to meet a major customer’s order, Salvador Arena spontaneously awarded a prize for productivity, for the first time. There was no legislation covering profit sharing or compensation for productivity, but the practice became routine in the plant and, whenever there was a special job, a prize was given. Even before the 13th month salary was introduced, Salvador Arena used to pay an additional salary at the end of the year. In time, depending on annual performance which he himself calculated, Salvador Arena would distribute a share of the profits, which came to 14, 15 and, at times, 17 or 18 salaries a year. In one year, exceptionally, 25 salaries were paid.

Salvador Arena wanted to protect his staff from the high market interest rates, and he created a Credit Cooperative, with subsidized rates, as an option for personal financing. Knowing that many of the staff went out at lunchtime to have a quick drink at a nearby bar, he had big bottles of cane liquor made available in the company canteen. The result: there were fewer cases of alcoholism, and production went up, contrary to the predictions of many of his business colleagues.

Before he died, in 1998, Salvador Arena had placed Termomecanica in a leading position in the Brazilian industrial sector, and it was classified among the largest private industrial companies in the country, a leader in the sector for transformation of non-ferrous metals into finished and semi-processed products, and highly capitalized, with shareholders’ equity valued at more than 800 million dollars.

Salvador Arena’s greatest dream was always to create a model school. He wanted this so much that, at the beginning of the 1960s, he set up a college inside his factory. He bought 150 chairs and desks, which were installed in a pavilion that was part of the factory. He hired Portuguese, Mathematics and Science Teachers. The staff finished work at 5 p.m. and went to classes. Some years later, the school was to be transferred out of the factory, and it began to serve the community of São Bernardo do Campo and neighboring cities, as Termomecanica School.

His successful company and prosperous business were not the only focus of Salvador Arena’s life. He had a critical nature, and he found time for humanitarian actions, contributing generously to charitable organizations and investing in social projects that he himself thought up.

He saw that time was short for so many plans. He therefore set up the Salvador Arena Foundation in 1964, as a sort of social arm to concentrate on helping vulnerable people.

In his will, which was stated in 1991, he appointed the Foundation as sole heir to his fortune. He left specific instructions in the Foundation’s statutes that it should "make all possible efforts to provide education, social assistance and protection for those in need, without distinction of nationality, race, sex, color, religion or political opinions in general". In this way Salvador Arena provided an institutional format for carrying out the charitable activities which he supported as an individual. His key achievements and legacy lie in the fields of education, healthcare, social assistance and affordable housing.

Salvador Arena died in the fullness of his 83 years, surrounded by what he most loved: his school, his staff, his machines, his factory, his community.

A man of personal convictions based on social theories, energetic, austere, paternalistic, a visionary, stubborn, controversial, his motivation was his belief in people and their potential, his dedication and his love of his work. Throughout his life he was never short of the daring, talent and hard work needed to put his ideas into practice. And it is thus that he will always be remembered by all those who were privileged to know him. When an old friend invited him to join him on an overseas trip, Arena replied in his typical Italian way, gesticulating and pointing to his factories: "I AM HAPPY HERE. WHY SHOULD I LEAVE? THIS IS MY WORLD."

Termomecanica, one of the major private companies in Brazil, is a leader in the non-ferrous metals (copper and its alloys) processing sector.

1. Any and all user access to this website, as well as its use for any purpose, will subject the user to all terms and condition described below, and considered its full acceptance, in addition to the law in force, ethical conduct and public order. Likewise, the user commits not to use this website and its contents insidiously against rights and interests of third parties, or any other use that might cause any damage to other people.

2. The user also commits to use contents of this website lawfully and do not copy, distribute, tamper or disclose its content, unless expressly authorized by Termomecanica São Paulo S.A.

3. The use of this website do not implies any type of assignment or authorization to the user regarding licenses or rights, either owned by Termomecanica São Paulo S.A., its affiliates or third parties.

4. Likewise, Termomecanica São Paulo S.A. cannot be held liable for damages, losses and/or loss of profits of any nature, arising from viruses or any other harmful programs existing on the web which may cause changes and/or malfunctions to equipment or applications of users.

5. Termomecanica São Paulo S.A. is exempt from any liability for damages, losses and/or loss of profits of any nature arising from any breach of intellectual or industrial property rights, trade secrets, any type of contractual commitment or any other right guaranteed by law from transmission, distribution, storage, sharing, receiving, obtaining or accessing this website or its contents by unauthorized users.

6. Any and all personal data of users stored on this website will be kept in a safe server and shall not be disclosed in any circumstance.

7. The use and/or linking of this website and its contents by unauthorized websites, such as accessing links, references and/or any other linking form is forbidden. Termomecanica São Paulo S.A. is exempt from any liability for any damage of this nature.

9. Purchasing orders for items submitted to this website subject the purchaser to the General Conditions of Purchase, available in the Purchasing Order issued by Termomecanica São Paulo S.A.

10. Termomecanica São Paulo S.A. reserves the right to change these Terms and Conditions at any time and whenever necessary, arising either from legal purposes or institutional and/or business objectives.

11. Termomecanica São Paulo S.A. also reserves the right to interrupt or cancel any activity of the website without notice.

12. Any dispute arising from this Terms of Use will be construed in accordance with the Brazilian law at the Court of District of São Bernardo do Campo, however privileged other court can be.